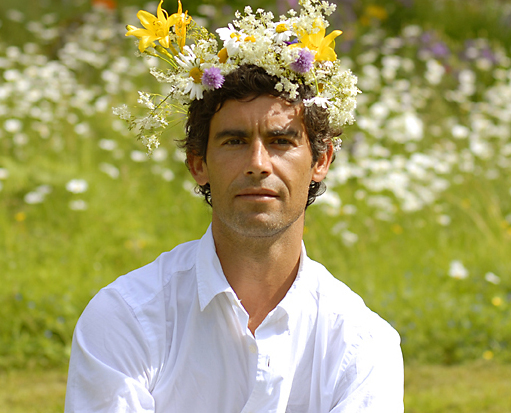 Born and raised in Austin, Texas, Stephen moved to New York in 1991 to study at the American Musical and Dramatic Academy. His attention turned to photography when a friend hired him to make prints by hand in the darkroom. His own early photographic works were of artist friends and vacation pictures of Capri. Being a self taught photographer, his talent for creating nostalgic moods and natural skin tones, soon caught the attention of the fashion and advertising world.

After moving to Paris in 2002, he worked extensively, shooting editorials for fashion magazines all over Europe via his reps Par31 in Holland and Sarah Daw in London. His personal work has been exhibited in galleries such as Tactile Bosche in the UK and the Mendo in Amsterdam. Stephen currently spends his time between New York and Austin.

The wonderful thing about being creative is being able to share that creativity with friends. A few years ago the two of us were able to do a magazine shoot together….

Rice: Stephen, I know we’ve worked together but I’d love to to know from your perspective the difference between a fashion shoot and doing photo’s for an event or wedding?

Elledge: Well, usually the raison d’être of a fashion shoot is to make a series of photos incorporating a product in the theme, such as clothing, makeup or jewelry. An event is more about picturing a moment and lifestyle choices of the subject. Lifestyle can be expressed visually by virtually anything from a smile of a child to table setting. We live immersed in a sea of pictures and each one speaks a language that we all understand. I think never before have we been so visually biased. A picture says a thousand words, right?

Rice: Indeed… When choosing to shoot on location or in a studio what are the most important elements…

Elledge: I choose location when I need more variables to choose from. Sometimes it’s the unpredictable ones that make it more interesting, like the ever changing light throughout the day, or how the light may affect a location, putting it in the shade or lighting it up.

Obviously, I’m partial to location shooting, but I do shoot in studio when I want lighting to be stable and I can focus strictly on the subject as if it were in a vacuum.

Rice: Working in a studio, our objective is to control the capture (image)…I know that this requires a lot of time. How do you charge when going on location for a wedding? By the day or hour and do you require an assistant?

Elledge: I prefer to work on a project fee based on the goals of the client and degree of difficulty because some hours are jam packed and others are quiet. An assistant is brought on when I am needed in two places at once and/or heavy equipment is required.

Rice: I love the process of hair and makeup and what happens with an idea that involves a team capturing that idea on film or digitally. How do you, the hair and makeup people dance together in order to create the most perfect image?

Elledge: I think mostly its about trust and respect. If I know the artists are capable and talented, I trust them and as a result, highlight their craft with what I do. We make each other look good if we’re a good team.

Rice: It really is about each person knowing what part they play…When working with a magazine what is the criteria when shooting Fashion an Event or Wedding?

Elledge: In the past I usually worked for one or the other. I suppose the criteria for a magazine would start with recognizable faces! Besides that it just needs to be beautiful. That’s what I told myself anyway.

Rice: I love that…What would you say is your philosophy? Do you prefer candid, posed etc?

Elledge: Candidly posed or posed candidly. My philosophy is candid for sure, but there is a magic to working in a still composed style, which coincidentally I’m more and more attracted to. Currently, I’m shooting most often with a large format box camera which requires a tripod and lots of prep. Exposure times are usually about 5 seconds. It’s a whole different world from running around with a camera in hand and chasing the muse. Bliss can be found both ways.

Rice: I agree…. Beauty is in the eye of the beholder and with the lens one is able to capture a millisecond of a moment which allows us personally and artistically to forever cherish…

Thanks Stephen for taking the time to share your thoughts and view point… I look forward to us capturing Beauty together soon…. GOTTA GO!!!! Have Passport, will travel!!

BEAUTY IS ALL AROUND US…